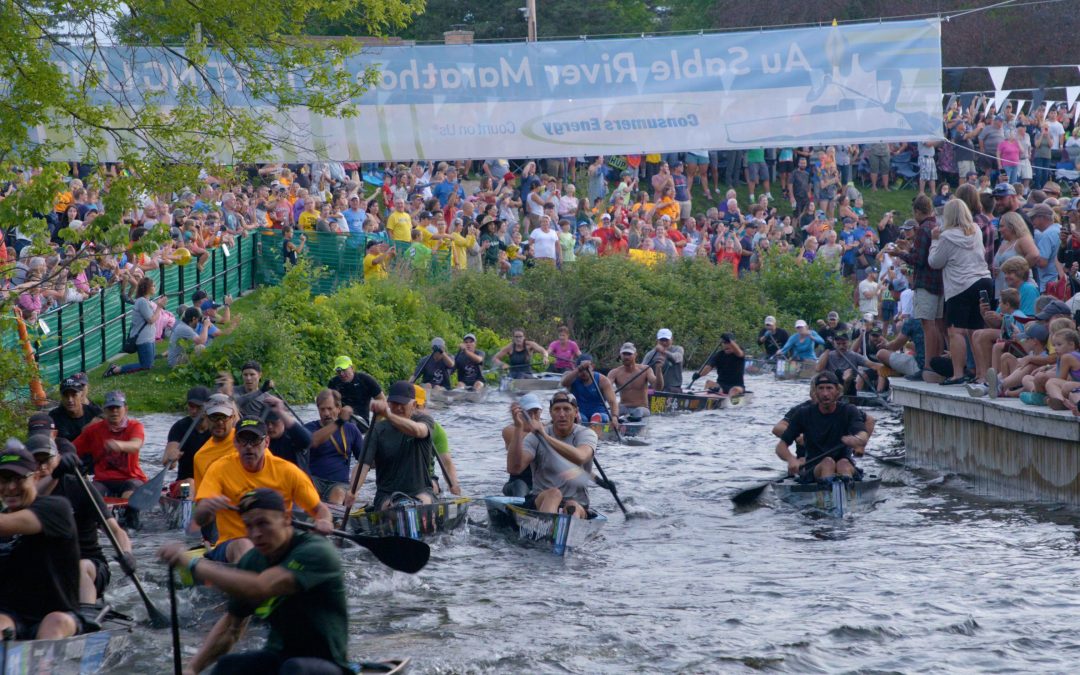 Under a full moon and close to pristine conditions, the AuSable River Canoe Marathon returned in record breaking style in 2021.

Over the past weekend, crowds filled the streets in Grayling, Oscoda and gathered at various dams along the race’s path, to the delight of Northern Michigan busines owners who felt the effects when the race was called off in 2020.

They cheered on a wide-open field. Some canoers were participating in their first AuSable River Canoe Marathon. Others were sage veterans testing themselves against the 120-mile trek yet again.  And two legends returned to compete for the first time in more than a decade.

Jordan Wakeley and Matt Meersman’s time of 13 hours 54 minutes and nine seconds smashed the previous record held by race Hall of Famers Serge Corbin and Solomon Carriere’s mark of 13 hours 58 minutes and eight seconds back in 1994.

It was a record and partnership that almost didn’t happen. Wakeley, 31, from Grayling, usually participates in mountain bike events all over the country throughout the year, but with the pandemic at its height, many were cancelled.

“I was looking for something else to do and I decided to team up with Matt back in February,” Wakeley said. “It was a good decision. We wanted to win this, but I never thought we would break a record that stood for so long. Not in a million years.”

The two men, who split a $4,000 prize as well as another $1,000 for breaking the record, set the blistering pace from the onset. Stopping at each of Consumers Energy’s Au Sable River hydros along the way – Mio, Alcona, Loud, Five Channels, Cooke and Foote – they were told they were on pace for the record.

“We just kept going steady,” said Wakelely, in his 5th race. “We weren’t too concerned about breaking the record, we stuck to our plan of being consistent.”

Meersman, who was in his 14th AuSable race, said with the exception of the thickest fog he had ever seen at the race, the conditions were close to ideal with the AuSable River running higher than normal.

“They always say to expect the unexpected here,” said Meersman, 44, of South Bend, Ind., said reflecting on opportunities in the past of paddling through treacherous storms, having his boat flipped and freezing under the moonlight. “But that really didn’t happen this year and that’s how we broke the record. Everything came together perfectly for us.”

With the record falling just before 11 a.m. Sunday morning, the next nine finishers continued to set a scorching pace under bright blue skies for the rest of the field. Brent Stockton and his partner Ryan Halstead finished ninth – and couldn’t be happier.

Stockton, 58, decided to come back just days before the marathon started in Grayling. It was the first time he raced at the marathon in 29 years.

“I thought it was a good way to test myself since I am close to 60,” said Stockton with a smile just minutes after competing in the race he had won nine times.

He said he and his partner flipped their canoe along the way, which set them back several minutes. But otherwise the conditions were the best he’s seen, Stockton said. Heavy rain hit the area just before the race, raising the water level, which helps canoers paddle more efficiently and effectively.

“It’s great to be here this year,” he said. “This place is special. But I don’t miss the pain that comes out of it.” He held up his hands to show about half a dozen blisters on each one as he flexed his legs to loosen them up from sitting in a canoe for more than 14 hours.

Dan Goltz and his partner Judson Steinback traveled from Wisconsin to take part in their first competitive canoe race.

“We paced ourselves and took it one bridge and dam at a time,” Goltz said. “But when we hit Foote Dam and had about 10 miles to go, it felt like 100 miles. That was the toughest part mentally for me.”

He said once he hit the finish line, he grabbed a blanket and collapsed in the shade.

“Every bone and every joint in my body hurt,” he said Monday while traveling back home to Wisconsin. “You don’t expect to use every part of your body canoeing. You use your legs to brace yourself and your back is twisting and turning to the right and left the entire time. It really is a full body experience.”

He added even with the pain, it was a phenomenal experience he will remember the rest of his life.

“There were so many emotions that we went through over the course of the race,” he said of his team that captured 31st place with a time of 15 hours and 44 minutes. “I’ve been in marathons, but this is tougher than those. This was a bucket list accomplishment for me that I can cross off now.”

One of the winners of the race, Wakeley, might have best summed up the feelings of the competitors at the finish line, who spent hundreds of hours training for the 73rd annual AuSable Canoe Marathon, over the last two years.

“It’s going to be awhile before I get back into a boat.”