Family Cheers as Power is Restored; Sends Thank You Note to Crew 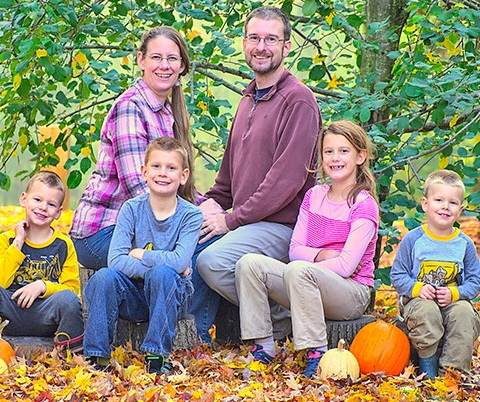 Sophia Morgan gazed out the window at the blinking lights as the crew worked through the darkness and a heavy downpour to restore power to her Litchfield neighborhood.

The nine-year-old, along with her parents and three siblings – Sherman (7), Shiloh (5) and Sylvan (3) – looked on with their fingers crossed that power would return soon. “The kids were really upset,” Sarah said. “It was almost bedtime and it was a nasty night – scary and dark for them.”

But the men and women of Consumers Energy came through for the Morgans and their neighbors – just in time for the children to go to bed.

As the lights went back on, the family cheered. The crew had made an impression on the family, especially Sophia.

“I told Sophia they can’t hear us cheer and see how excited we are,” Sarah said. “They don’t know how much it means to us.”

Right then, mother and daughter decided to put sending a thank you note from the family to the crew on their to-do list.

But life got busy due to the holidays, and as with most things on that list, the box went unchecked. That is until Sophia was given a school assignment to give thanks to somebody; it dawned on the family they had a group of people in mind.

“So, we got a thank you card out, sat down and wrote a nice note to the crew,” Sarah said. “It was our way of showing appreciation for what they do for us every day.”

A portion of the letter from the family reads, “You are our heroes, and we love watching you work. Thank you for all you do!”

“Maybe that’s the reason they are so drawn to these crews working around the clock – maybe they will be part of one someday,” Sarah said with a laugh. “That’s alright with me – they would be working with great people and a terrific company.”