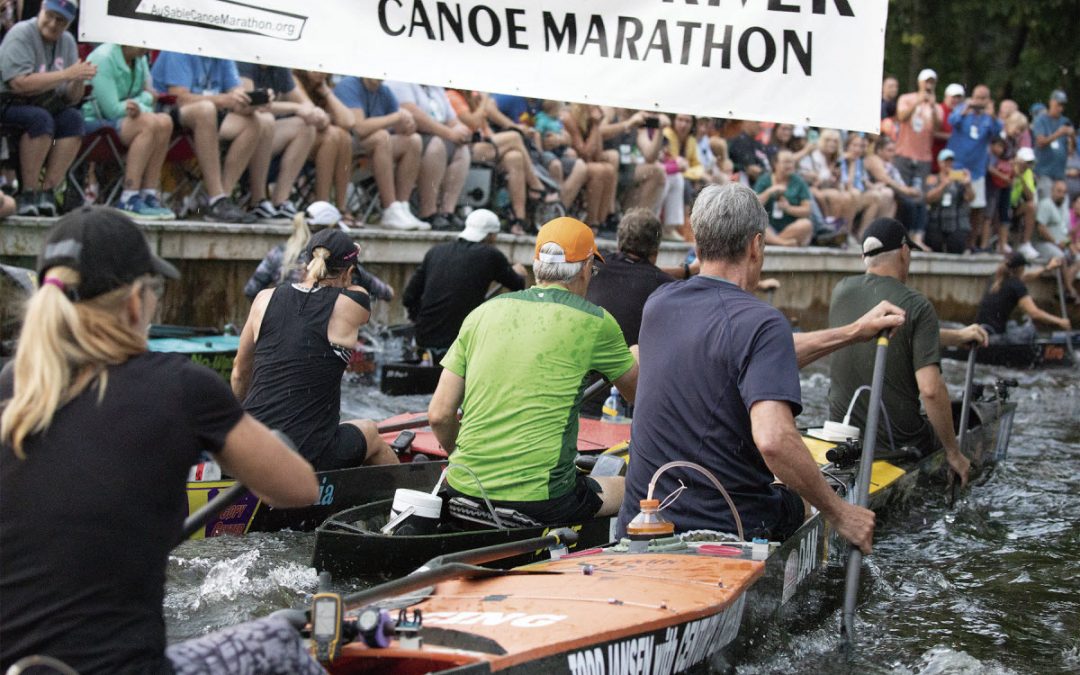 Sponsored by Consumers Energy, the AuSable River Canoe Marathon makes its sparkling and long-awaited return Saturday, July 24 as outdoor enthusiasts from around the globe converge on Northern Michigan.

The thought of the marquee canoe competition and the sights and sounds that accompany it brings smiles to the faces of business owners after a one-year hiatus. Some struggled mightily during the height of the global pandemic last year.

The economic impact of the race on businesses along the race route has been well over $1 million annually, according to marathon organizers. And that is expected to continue this year, with most hotel rooms booked solid and restaurants expecting an uptick in customers at the race’s start in Grayling and at the finish line in Oscoda.

With the expected boosts in revenue community morale, some are calling it the most anticipated race in its nearly 73-year history.

“It’s a shot in the arm that Northern Michigan really needs right now,” said Bridget Harland, owner of the Grayling Restaurant. “It’s been a tough year, but this will hopefully be the first step in things returning to normal.”

Harland said with COVID-19 restrictions in place, the restaurant’s business was down more than 50 percent from July and August 2020 compared to the same time in 2019.

“We really missed the race being here last July,” she said. “That’s why I would expect a huge crowd this year. I’ve never seen the level of excitement in the community getting ready for this race and I’ve been here since 1978.”

Tucker Whitley, general manager for the AmericInn in Oscoda, said the hotel has been booked for race weekend for about a year.

“There has been a tremendous interest in the race ever since it was postponed last year,” he said. “We have had people book from as far away as Spain and Australia.”

“We have had some local businesses help keep our doors open by booking with us,” he said. “Hopefully the momentum will continue after this race.”

Whitley added there is a buzz in the community as everyone gears up for the race’s finale.

As a coach on the varsity football team, he and the players will help participants with their canoes as they cross the finish line.

“It’s something we have done the last five years as a way for us to be part of this great event,” he said. “It really does create one large community from Grayling to Oscoda and everything in between, and it’s pretty cool to see,” he said.

Over at Penrod’s AuSable Canoe and Kayak in Grayling, owner Jim Humes said his business struggled in spring 2020, but picked up substantially as the calendar turned to summer.

“I was extremely worried in April and May (of 2020), but things got better and carried over into this year,” said Humes of the business that they family has owned for 52 years, “And hopefully things will keep getting better before, during and after the race.”

Humes said he welcomes the race’s return, since it raises the profile of Oscoda and Grayling and every community in between the 120-mile race.

“It’s great advertising for our area since it showcases the beauty of Northern Michigan,” Humes said. “It’s always exciting to have it back and see businesses busy during race weekend. It was missed last year, but it’s a new year.”